The misadventures of Maddy Marks: This blog will reflect upon my experiences as a young submissive...A diary of my exploits as a spanking model and lifestyle submissive in the BDSM/kink community. 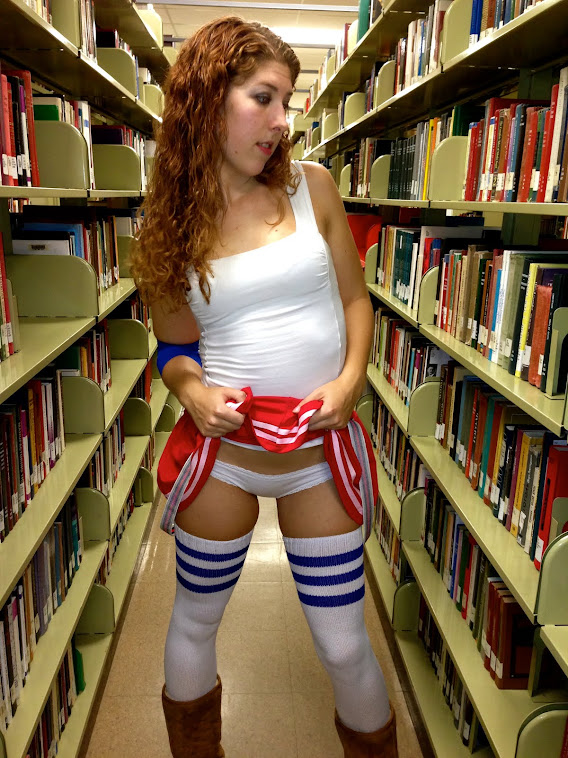 Once Upon A Time

On Sunday I went to the Hollywood Spanking Munch and Party Group's Once Upon a Time spanking party for which I was super excited.  It combines two of my favorite things...themed costume parties, and spankings!  I tend to obsess over what to wear to parties and this one was no exception, but I eventually decided to go as Little Red Riding Hood (my adventure in actually finding a cape is quite a story in itself...so difficult ^.^).  My friend Callerina came over early before the party so we could get all pretty together, which was very fun.  She did an amazing job doing my hair and I thought it totally made the look!  Unfortunately all the hair curling time caused us to be a bit late to the party and I missed the costume contest.  I was super bummed, made worse that at least 4 people came up to me and teased me about missing all the fun *grumpy face* 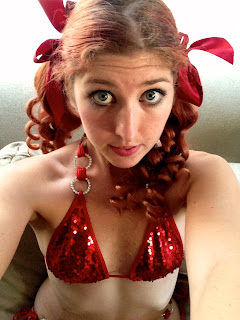 Between bouts of being teased, I flittered around the party chatting with my fellow spanko friends.  I ran into my friend, the super duper cute, Christy Cutie.  Like usual we squealed over each others outfits and talked about belly button rings and red bottoms :D

After I was done being a social butterfly, my Daddy and I went in to the main playroom to settle down for some spanking time.  He sat in one of the big leather chairs and I straddled his lap facing away from him, resting my arms on a second chair.   It's kinda a weird position to describe, but I love how my legs are pinned against his, and it puts my butt perfectly in front of him.  This allows him to beat my bottom like a drum, as well as grab my hips and pull me back into his lap when I try to squirm away.  I get the freedom to wiggle my butt in front of him, but know that he's always in control and can grab me whenever he likes.

The spanking started off slowly, with loving slaps to my butt that really started to warm things up.  I could look back and see that my bottom was already starting to turn a pretty shade of pink.  My Daddy started hitting me faster and harder, building up pace until he was hitting me so hard that I could hardly stay still.  He'd change tactics, sometimes alternating cheeks, five swats to one side then five to the other, other times doing a set of rapid fire spankings, alternating cheeks without pause until the swats were indistinguishable.  It's one of my favorite styles of spanking from my Daddy...it really gets me hot and worked up, since I can barely catch my breath.  After that the spanking intensified even more, as he hit both cheeks simultaneously with such force that pushed me forward into the chair I was resting against with each hit.  The sting was incredible and I couldn't help but let out a yelp with each slap.  Looking back at my ass I could see little bruises beginning to form beneath the ties of my Little Red Riding hood bikini.  I love rubbing my tushy when it's on fire like that...feeling so hot and warm and yummy :)

After my spanking Daddy let me have a little break to dance around and have a cookie too!  But soon enough I was sitting in my chair facing him, when he told me to spread my legs.  With my legs spread, and feeling incredibly vulnerable, he began to slap the inside of my thighs.  The sting was incredibly, and it was so much more ouchie than a swat to my bottom.  He alternated thighs until they were both nice and pink.  Then he picked up pace and hit them with a one two, over and over again, switching legs every minute or so.  It was so incredibly ouchie, I was squirming and felt like I was about to cry.  Daddy told me to hold still, and obeying him was so incredibly difficult, but I resolved to do as I was told.  I concentrated on looking into his eyes as he slapped me harder and harder and I could feel my thighs burn.  At that point my thighs were speckled with small purple bruises that began to blossom with each additional hit.  There's something about seeing bruises that makes me incredibly happy, and at that point I just began to revel in the endorphins and happy spanky feelings.  As the spanking slowed to a stop, the pain was gone and all that was left was the wonderful feeling of euphoria.  Yay spankings :) 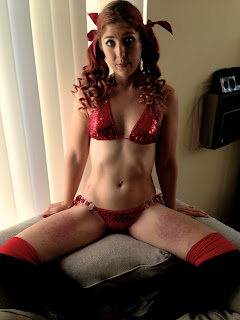 To finish it all off, I was put over the spanking bench for a quick and hard caning.  Daddy used our full length bamboo cane.  It's my favorite of all our canes, as it's quite thuddy, but it's still quite powerful and ouchie.  I received ten hard thwacks to each cheek, then a final ten extra hard strokes which I counted out one by one.  I didn't know it at the time, but I was supposed to receive another 10...apparently my whimpers and pleading for mercy saved my tushy.  ^.^

And that was the end of this Red Riding Hood's spanking adventure this week.  I'm rather proud of my wonderful bruises, and they're the perfect reminder of my most excellent spanky weekend.  This Maddy absolutely adores her marks *wink wink nudge nudge*